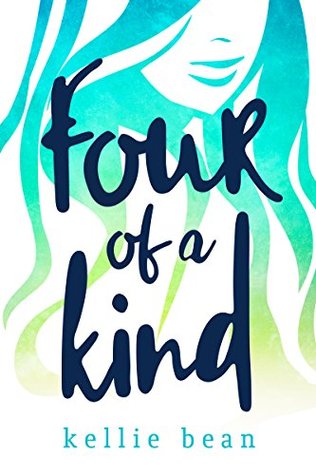 This book was given to me for free via NetGalley in exchange for an honest opinion. It has not affected my review at all.

This book was pretty okay. This rating doesn’t really seem to reflect that, but it’s true. I just almost DNFed it because I was so bored. There isn’t really a plot, since this is a character-driven story. But I didn’t care about the characters enough for that to work out, so most of the time I was just waiting for it to be over. Also, the characters are newly 15 year olds. I wasn’t expecting them to be so young, and it really showed.

The odds of giving birth to identical quadruplets: 1 in 13 million.

The population of Fairview, a town where all anyone talks about is the Fairview Four’s return after fourteen years: 47,327.

The chance of Reagan meeting a guy who sees her as one of a kind: better than she thinks.

Following in her sisters’ footsteps—and, all too often, their shadows—is nothing new to Reagan. But a disastrous first day at Fairview High forces her down a new path, one that could lead to seeing herself as more than just someone else’s sister. Things aren’t going as smoothly for Reilly, Reece, and Rhiannon though. How can Reagan let herself be happy—or dare to fall in love—when she may be the only one who can bring her family back together?

Sisterhood of the Traveling Pants meets Gilmore Girls in the first novel of a heartwarming new series about first loves, family, and finding your way.

Ugh, I know by now I should be wary of the “x meets y” line, but I love Gilmore Girls just too much to avoid this. But of course, nothing can compare to that show, and this book just fell flat. The synopsis makes it sound like their family is falling apart and everyone is miserable and everything is going wrong, and that Reagan was going to rise from the shadows and be her family’s hero, all newly confident and amazing. But did that happen? Nah. Their family was adjusting, sure, but only one of her sisters was really having a disastrous time. The plot was essentially just following Reagan through her daily life as she finally comes out of her shell. This style of plot depends on a good cast of characters, which in this case wasn’t done too well.

Also, I felt like a lot of problems were just brought up without being fully addressed. Reagan is growing distant with her best friend from Richmond, but the full effect of that is never addressed. We get that she is sad, and there’s a sister bonding moment, but then she just gets over it. This is her best friend since elementary school, so I feel like there should be some maturity from this situation. Maybe some reflections, some talking it out with her friend, some more extended sadness.  So the character arches and growth, as well, just wasn’t developed enough for me.

I liked all the characters enough, but not enough for this character-driven story to work out. I felt like a book about quadruplets needed more character development. We get the basics of who is who- Reece is the popular and loud one, Reilly is the nice one, Rhiannon is the rebellious and smart one, and Reagan is the shy one. But I needed more about who makes who who they are. I mean, I just kept mixing up Reilly and Reece’s personalities. Also, we would hear a lot about the sisters’ personalities but I didn’t really see any of that in this book. So overall their development left something to be desired.

I’ll focus on Reagan though, since she was the main character and so she had the most development. I didn’t know as I was going into this book that they were going to be 15, and it showed. A lot of Reagan’s moments were very “OMG! I am FREAKING out! This is the worst/best/most annoying thing that ever happened to me!” I know teens can be dramatic (believe me, I know) but this was over the top dramatic. And she could also be pretty self absorbed. She was so happy being…well…happy, that she didn’t notice some of her sisters were sad. But she wasn’t awful, even though this makes her sound like she was! She did genuinely care about her sisters, and I appreciated her level of nerdiness. Even though it wasn’t personally stuff I nerded out on, I can appreciate a nerding out.

The moments I loved the most were the sister moments. I wanted more of that. I think it’s special to be a quadruplet, and I love how all the sisters are each other’s best friends. That being sad, I wanted more of them being individuals. The way it’s done is they all eventually change the way they look on the outside, but on the inside I don’t think Reagan has come to terms with how to be an individual with three identical sisters, and I think she needed to. And that’s what this book was supposed to be about.

The side characters also were just one dimensional people. Kent is Reagan’s new “friend” *waggles eyebrows* but what do I know about him?  He has a green streak in his hair and…um…he’s nice? I know that Jen is another one of Reagan’s friends, and she’s pretty bossy and intense about schoolwork. I just feel like if a whole new cast of characters is going to be brought in, they need to be developed. I get that Reagan herself doesn’t even know them that well yet, but these people seemed more like cutouts of a person than an actual person with a personality.

The eBook format was pretty easy to read, which surprised me because sometimes the NetGalley version is messy. There were some spelling errors that I hope don’t appear in the final version because they were pretty drastic. For example, Reilly’s name kept switching to Riley. And Reece would switch to Reese. I mean, these are the sisters. Their names should be consistent. Other than that, there were a couple lacks of apostrophes (saying were instead of we’re), but otherwise it was pretty clean.

It wasn’t that I disliked this book, I was just bored while reading it and think it left some to be desired. I claim this book as just being okay. It’s apparently part of a series, but I don’t think I’ll be looking for the next book.

5 thoughts on “ARC Review: Four of a Kind”