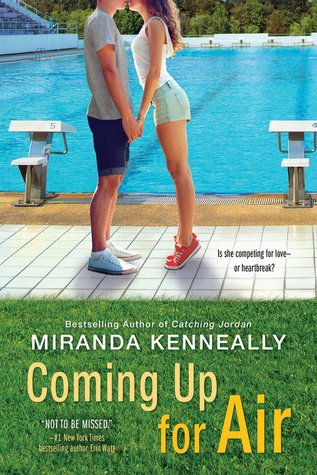 *Disclaimer: This book was given to me for free from Netgalley in exchange for an honest review.

So I recently joined NetGalley, and this is my first ever book I received from it! Bear with me, because I’m not entirely sure how it works, but am I correct in assuming that you have to post your review before it officially comes out? I just got approved for this book like four days ago, so I sped read it and sped wrote a review to get it out  the day it is being released. So not officially part of the review, but if someone wants to help me figure out how the whole NetGalley etiquette works, that would be much appreciated. Now on to the review!

In middle school, the Hundred Oaks series was my favorite series. Maybe that’s why I keep buying the new books and reading them, even though as I get older I can recognize the faulty writing skills and underdeveloped characters. It still gives me a sense of pleasure, and it is an enjoyable read, even though critically it is not the best book or best written book. I’m very excited this book was about swimming, because I swim (although not as competitively as Maggie does), so I actually understood what was happening.

Maggie and Levi are both competitive swimmers, and have been best friends since birth. As their take on their senior year, Maggie starts to worry that she is missing out on the “typical high school experience”, because swimming takes up so much of her time. She proposes that Levi helps her catch up and create that typical high school experience, but deeper feelings ensue, and so does drama and hurt feelings.

Honestly, I thought both Maggie and Levi were unremarkable characters. Not that they were bad, I just don’t think they were very fleshed out. Maggie is a competitive swimmer who overanalyzes everything, feels insecure about herself, and lets others get into her head. Levi is a competitive swimmer who flirts a lot and likes to read. That’s about all there is to them. They both felt like they were just given traits, but the traits didn’t create a rounded out character.  The same goes for the side characters. The only thing I can say about their best friend Hunter is that he plays baseball and wants a deeper relationship with the girl he’s hooking up with. The only thing I can say about their other best friend Georgia is that she’s a cheerleader, has an overbearing mom, and was cheated on once. The characters were all fine to read and likable enough, but they didn’t feel very real to me.

Their romance also felt a little underdeveloped. I think because it was assumed right off the bat that they were going to get together, instead of teasing us with their falling in love moments, Kenneally had them go from just being close friends to being in love. Just like that. Which honestly, was disappointing, because I was looking forward to some cute and innocent love stories like she usually does. Also, this book was very very physical. Maybe it’s because it’s been a long time since I’ve read her earlier ones, but I don’t remember it being as physical, except for maybe Stealing Parker. It was enough so that it actually made me uncomfortable to read a lot of it. Like watching really bad PDA.

Also, the writing and formatting was a bit off. Some of it I know will get fixed before the final edition, like the weird spaces and lines with only one word on it, but others I recognize from her earlier books as well. She is a big practicer of telling us something, not showing us something. And that, to me, is a sign of poor writing. It was not so bad that it made the book unenjoyable, but it halted the flow of the story and definitely took away from what could’ve been a very good book.

One thing that I always love in Miranda Kenneally’s books is how they all take place in the same town. That means you get to see other characters from previous books pop up every now and then. I mean, it’s a bit weird since all the books take place during the character’s senior year of high school, but there is an age gap between the first three or four books and her most recent ones. So, some of the characters in her newer books, like Maya from Jesse’s Girl, is a sibling of a previous character. Still, I love watching the characters pop in every now and then letting us know they are still okay and still working. Although, what was that epilogue? It wasn’t even about Maggie and Levi!

Also, her swimming depiction was pretty accurate. As I mentioned earlier, I swim, but not at the same competitive level. However, I have friends who do swim at that competitive level, and yes, they do wake up at 4 am before school starts to go practice, and do double practice most of the days. And yes, there are always meets going on. The one thing I will say is that it is not super likely that just because a swimmer is an elite swimmer means they are trying to have an Olympic Trial cut like Maggie and Levi are. Where I live, swimming is a huge sport, and there are kids on my swim team who are amazing and win every race against other amazing swimmers, and place in national meets. But even then, their times are five seconds off from the Olympic Trial Cut times. I mean, there always are those swimmers that are in the same league as Olympic Trial swimmers. At least two people from my swim team in recent memory have made it to the Trials. But I don’t know if it is that likely that they both are best friends and able to make the cut in high school. Still, it made for a good plot point and backdrop.

So all in all, this book was alright. Not stellar, but I don’t regret reading it.

Have you read this book? What do you think? Does it live up to her other books?

2 thoughts on “Book Review: Coming Up For Air”